When a group of influential Leeds merchants petitioned King Charles I for a Royal Charter in 1626, one of the wrongs they wanted correcting was Leeds’s lack of representation in Parliament. The King granted the Charter but Leeds failed to secure an MP.

Although Leeds’s interests were represented in Cromwell’s Parliaments in the 1650s by Adam Baynes, a civil war officer from Knostrop, the town would have to wait until the Reform Act 1832 before it became a Parliamentary constituency.

The battle for Parliamentary reform was fought bitterly in Leeds. The Tories, who controlled the corporation of Leeds, resisted the calls for wider representation and were supported by the Tory-sympathising ‘Leeds Intelligencer’ newspaper. Edward Baines, of the Whiggish ‘Leeds Mercury’, led the calls for reform.

On 14th May 1832, a crowd of 20,000 attended a public meeting at the Leeds Mixed Cloth Hall (the site of modern-day City Square) in support of the Reform Bill, requiring greater representation in Parliament. At the end of the meeting, according to a report in the ‘Leeds Intelligencer’, various prominent backers and opponents of the Bill were given a chorus of cheers and groans: 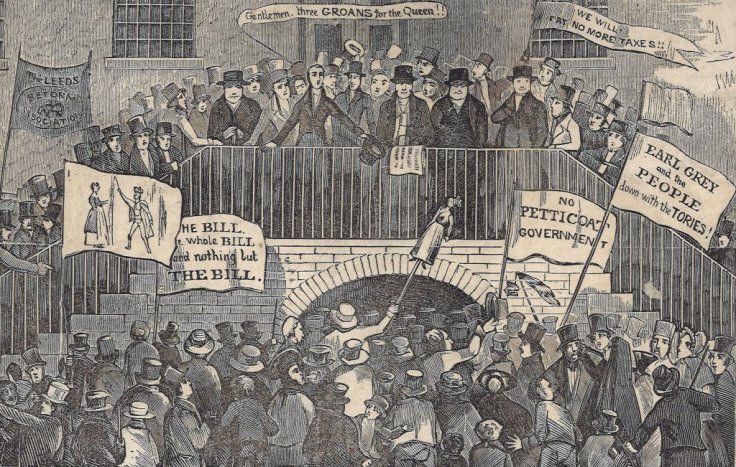 Above: a depiction of the Reform Bill meeting at the Mixed Cloth Hall, 1832. Picture credit: Leeds Library and Information Service.

The Reform Act 1832 received Royal Assent later that year and, as a result of the reforms, Leeds elected its first members of Parliament in that year’s general election.

Campaigning for the 1832 election was accompanied by much violence: Whig-supporting Orangeists fought with Tory Blue Bludgeon Men. The town’s special constables were sent to the Mixed Cloth Hall to quell a riot caused when the Tories marched from Briggate carrying a banner depicting children working as slaves in Marshall’s Mill, Holbeck (John Marshall junior was standing as a Whig candidate along with historian Thomas Babington Macauley; the Tory candidate, Michael Sadler, was a vocal campaigner for better conditions for children working in mills and factories).

Sadler grew a beard during the campaign and his opponents claimed that he had done so to curry favour with Jewish voters and speculated whether he might also have been circumcised. In response, Sadler said that his detractors had brought voters’ attention to “a certain part of the human body to which it had hitherto been thought in a civilized society indecent to allude”.

In the 1832 election, only households worth £10 or more were eligible to vote. This counted against Sadler who enjoyed much support among the working classes but they were ineligible to vote. Both Whig candidates, Marshall and Macauley, were duly elected as Leeds’s first two MPs. Leeds remained a Liberal stronghold for the next 50 years or so.

On 3rd May 1842, a petition in support of the People’s Charter was presented to Parliament. It had been signed by 3 ¼ million people, more than 40,000 of whom came from Leeds. The Chartists, as they were known, were asking for the right to vote to be extended to all men over the age of 21 and for certain other reforms to make Parliamentary elections fairer and more representative.

Leeds was at the centre of the Chartist movement and was the home of the ‘Northern Star & Leeds General Advertiser’ founded by one of the heroes of the movement, Feargus O’Connor. At its peak, the ‘Northern Star’ had the second-highest newspaper circulation in the country.

When Parliament rejected the petition, frustration boiled over into anger, exacerbated by a worsening economic climate, increased unemployment and widespread pay cuts for those in work. The summer of 1842 saw a general strike and a series of sometimes violent protests, in which protestors sabotaged mills by removing plugs from the boilers to prevent steam from being raised – these became known as the ‘Plug Riots’.

Such was the tension in Leeds that Prince George, Duke of Cambridge was despatched to the town at the head of the 17th Lancers to help keep order. More than 30,000 staves were prepared and sharpened to use against the mob.

On 17th August 1842, an immense crowd set out from Bradford towards Leeds. By the time they had reached Calverley, their numbers had swelled to more than 6,000. At every mill they passed, they demanded that the plugs be pulled and, if their demands were not met, they were prepared to use violence.

At Bramley, some of the protestors were so racked with hunger that they looted butcher’s shops and ate the meat raw. After stopping all the mills in Bramley, the protest rolled on to Pudsey.

By now, several thousand more had joined the throng which had grown to more than 10,000-strong. The manager of Bank’s Mill in Pudsey sought to defy the plug-pullers and violence soon erupted, with the protestors intent on destroying the mill.

A detachment of the 17th Lancers was sent to read the Riot Act and put down the protest. Defiantly, the crowd surged towards the mounted soldiers who, numbering only 14, turned their horses and fled back to Leeds. Once Bank’s Mill, like all the others, had been stopped, the crowd began to disperse.

Meanwhile, in Leeds, there were several clashes between protestors, the Lancers and the Leeds City Police Force. Thirty-eight men were arrested and subsequently charged.

Despite popular support for Chartism, it was not until 1867 that the right to vote was extended to working class (male) heads of households and it would be another half century before all men obtained suffrage. Leeds was also central to the women’s suffrage movement and I have written about that here.

Leeds was granted a third MP in 1867 and was subdivided into five constituencies in 1885.

In the late 19th and early 20th centuries, Leeds also played a pivotal role in the creation of the modern Labour Party. In 1884, Tom Maguire established a Leeds branch of the Social Democratic Federation which later disbanded and became part of the Socialist League. Maguire organised the Leeds gasworkers’ strike in 1890 before joining the Independent Labour Party in 1893. 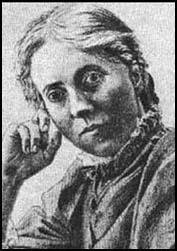 Some of Leeds’s notable MPs include the following:

Liberal Prime Minister, William Ewart Gladstone, was elected as one of Leeds’s MPs in the 1880 general election but had also campaigned and been elected in Midlothian. He took his seat there instead.

Conservative Gerald Balfour, brother of former Prime Minister, Arthur Balfour, represented Leeds Central from 1885 to 1906. He was interested in the paranormal and was “a firm believer in the reality of communication between the living and the dead”. He served as President of the Society for Psychical Research after losing his seat.

Herbert Gladstone, son of Prime Minister Gladstone, was re-elected as MP for Leeds West in 1906 with an increased majority as a result of a tactical voting pact which saw the Labour Party candidate stand aside. At the same election, James O’Grady became Leeds’s first Labour MP.

Prominent local solicitor Arthur Willey was elected as Conservative MP for Leeds Central in 1922 after tipping his racehorse ‘Leeds United’ to win at Leicester. Its subsequent win netted Leeds voters combined winnings of £190,000.

Willey’s tragic death (about which I have written here) resulted in a by-election in which fellow Conservative Sir Charles Wilson was elected in his place. Wilson was a larger than life character who reputedly once wrestled naked with the Mayor of Paris. He wanted Leeds’s territory to extend from the Pennines to the North Sea. During his leadership of Leeds City Council, various suburbs were brought within expanded Leeds boundaries, including Cookridge, Alwoodley, Roundhay and Seacroft. He once declared that “I am Leeds” and wanted “to make Leeds the hub of the universe”.

Leeds West Conservative MP (1931-45) Vyvyan Adams was one of only two Conservative MPs opposed to Chamberlain’s Munich Agreement with Adolph Hitler. When the Nazi zeppelin Hindenburg flew over Leeds in 1936, Adams raised concerns in the House of Commons. He served in the Second World War with the Duke of Cornwall’s Light Infantry.

Labour’s landslide election victory in 1945 saw Leeds return its first female MP. Alice Bacon served Leeds North East and then Leeds South East from 1945 to 1970. Rachel Reeves (current MP for Leeds West) is so far the only other woman to have represented Leeds in Parliament.

Sir Donald Kaberry (Conservative, Leeds North West 1950-83) commanded a battery at Dunkirk and was injured when the IRA bombed the Carlton Club in 1990. He died the following year, aged 83.

Dennis Healey served as Labour MP for Leeds South East and then Leeds East from 1952 to 1992. Healey, famed for his bushy eyebrows and supposed catchprase ‘silly billy’ (attributed to him by impressionist Mike Yarwood), once famously likened being questioned in the House of Commons by Geoffrey Howe to being “savaged by a dead sheep”.

Labour leader and Leeds South MP Hugh Gaitskell was widely expected to become Prime Minister at the 1959 election but the Conservatives under Harold McMillan ran a highly effective campaign and increased their majority. Gaitskell died prematurely aged 56 following a visit to the Soviet Union. Conspiracy theorists claimed that he had been the victim of a KGB plot to install Harold Wilson as Labour leader and, subsequently, Prime Minister. These claims have never been substantiated.

Roman Catholic John Battle (Labour MP for Leeds West from 1987-2010) was made a Knight Commander with Star of the Order of St Gregory the Great by Pope Benedict XVI for his contributions to the church and to Parliament.

Hilary Benn (Labour MP for Leeds Central since 1999) has the dubious distinction of being elected on a turnout of just 19.6% which, at the time, was the lowest ever turnout at a by-election.