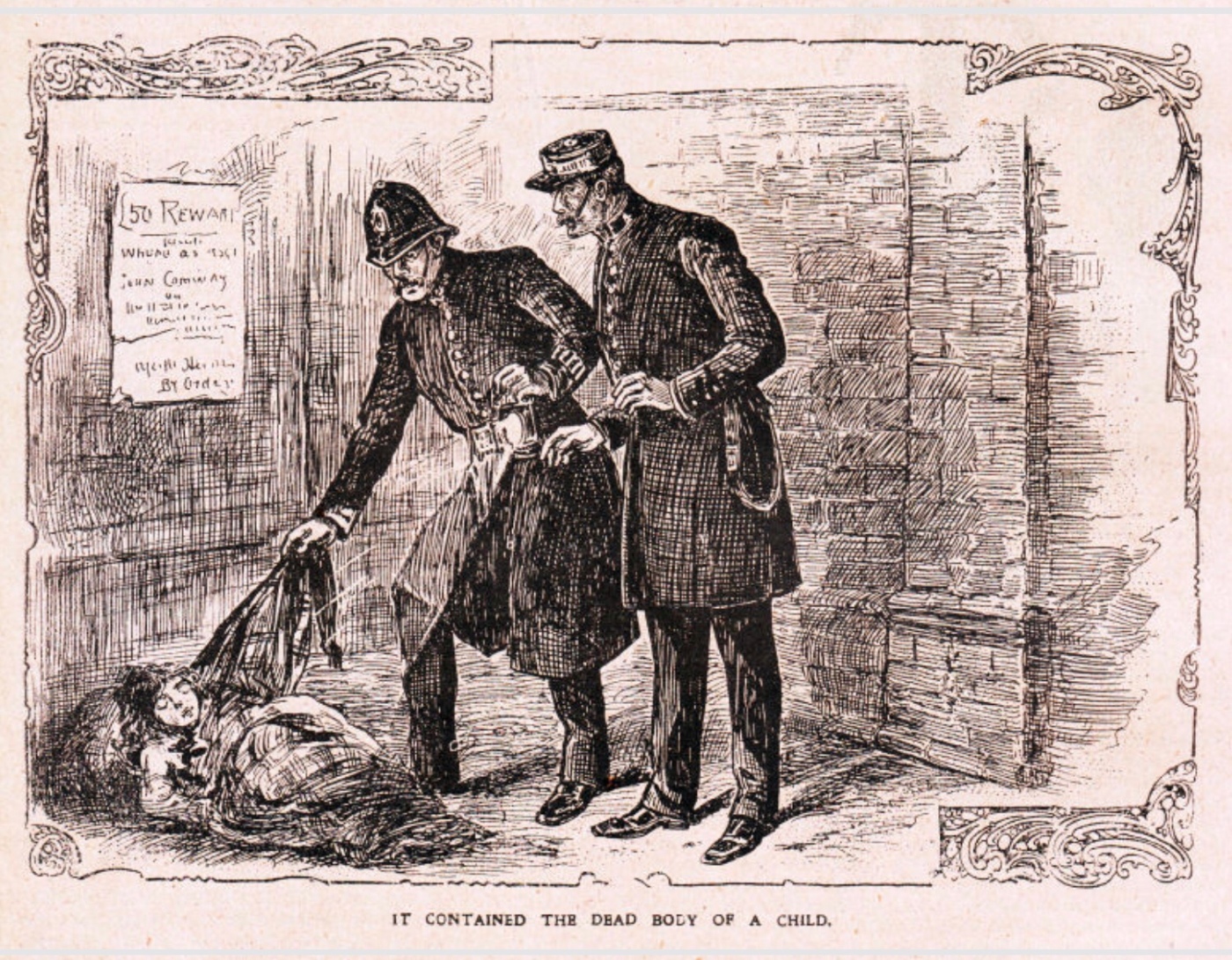 The ghost of an elderly, bald-headed man, nicknamed Fred, haunts the court buildings. He was first seen by a security guard who followed him into a courtroom. When she entered behind it, the apparition vanished despite all other exits being locked. Another security guard refused to work in the building at nights on his own.

In 1874, an area close to the modern-day court buildings was the subject of an elaborate paranormal hoax. Reports of a ghost (which was actually a man in costume) drew large crowds, who threw stones and bottles and even fired pistols at it. The disturbance had to be broken up by Police and two men were charged with disorderly conduct.

Beneath the stone steps leading up to the Town Hall lies its Victorian bridewell – the cells where prisoners were held while they awaited trial in the Assize Courts or onward transfer to Armley Gaol where 93 men and one woman were executed between 1864 and 1961.

The bridewell is haunted by the ghost of Charlie Peace, a notorious murderer and burglar, who was tried at the Town Hall and subsequently executed at Armley Gaol in 1879. He had previously escaped from Police custody but, during his time in the bridewell, was secured with handcuffs and leg irons and guarded by four officers. The life story of Charlie Peace has spawned books, films and even a comic strip. He and his executioner were also once depicted in Madame Tussauds’ Chamber of Horrors (pictured).

There are several legends surrounding the Town Hall lions, all of which involve their coming to life at various times of night. One such tale says that, if you can run a complete lap of the Town Hall in the time it takes for the bells in the clock tower to strike midnight, the lions will wake up and swap places. Another says that they come to life if the clock strikes thirteen.

It is said that these tales led to the bells being silenced at night. However, the more prosaic explanation is that they stopped chiming between 10pm and 7am out of respect for the patients in the nearby Leeds General Infirmary.

Other mythical beasts that are said to stalk the city include devil dogs (variously known as ‘barguests’, ‘black dogs’ and ‘padfoots’) and ‘gabble ratchets’. Depending on which variant of the story you believe, ‘gabble ratchets’ are either hell-hounds (like ‘barguests’)or the tormented souls of unbaptised children. In either case, they are said to be the harbingers of death. The origin of the ‘gabble ratchet’ myth probably derives from the eerie sound made by migrating geese flying high overhead at night. 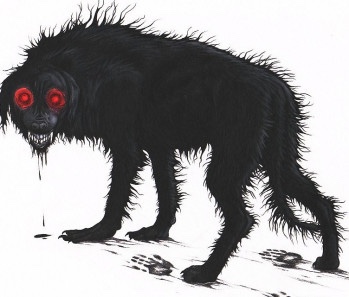 On the morning of Saturday 6 June 1891, six-year old Barbara Waterhouse went out to play in Horsforth Town Street. Her family never saw her alive again. She simply vanished. The Police and local community frantically searched for her for the next few days but there was no sign of her.

In the early hours of 11 June 1891, a Police officer on patrol noticed a small bundle lying in Alexander Street, near Leeds Town Hall. He was sure that it had not been there when he last passed by. Upon closer inspection, he discovered to his horror that the bundle was the severely mutilated body of a child wrapped in a woman’s shawl.

Later that day, the body was identified as that of missing Barbara. She had sustained multiple stab wounds, her intestines protruded from her body and her head and limbs were almost severed from her torso.

The ferocity and method of the assault immediately drew comparisons with the Jack the Ripper killings that were terrorising Londoners at that time. The actual culprit, however, turned out to be a Horsforth man, Walter Turner. His mother had helped him dispose of the body (wittingly or not) but eventually gave evidence against him.

Turner was subsequently convicted of Barbara’s murder and hanged at Armley Gaol on 18 August 1891.

The skulls of two executed Catholic martyrs, Blessed Peter Snow and Ralph Grimston are kept as relics inside the cathedral. They were executed in York on 15 June 1598. Their faces were digitally reconstructed in 2005 using the latest techniques developed by The University of Dundee. 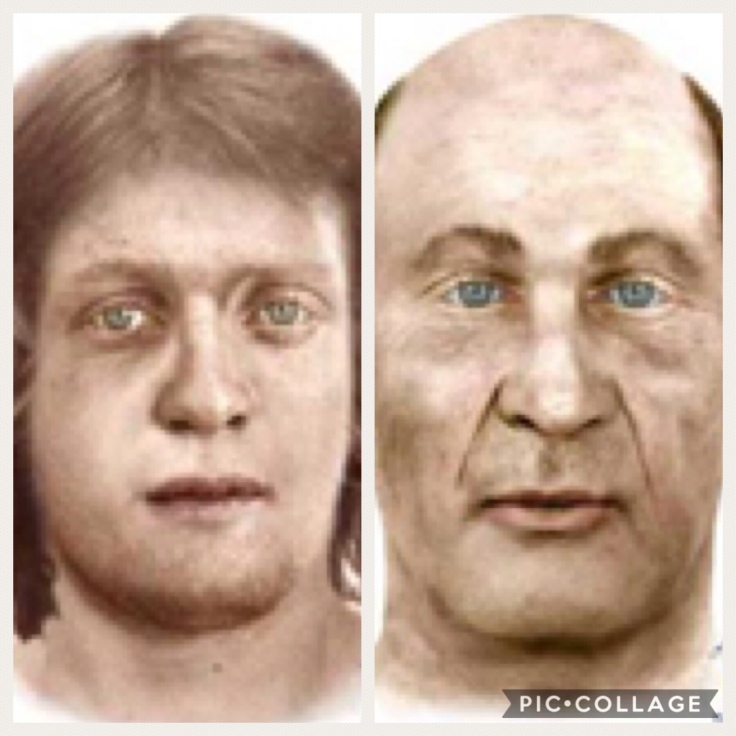 At the end of the English Civil War, King Charles I surrendered to Parliamentarians in Newcastle. On his way to be being taken back to London for his trial and subsequent execution, Charles spent the night of 9 February 1647 in Leeds at the house of John Metcalfe, known as the Red Hall. During his stay, Leeds merchant John Harrison smuggled a tankard full of gold to the king and one of Metcalfe’s servants, Mrs Crosby, offered to help him escape disguised in some of her clothes. He refused.

The last remnants of the Red Hall were demolished in 1967 but the memory of Charles I’s stay is preserved in the name of the street. A stained-glass window in nearby St John’s Church, built by Harrison, depicts Harrison giving the king his tankard of gold (pictured below). 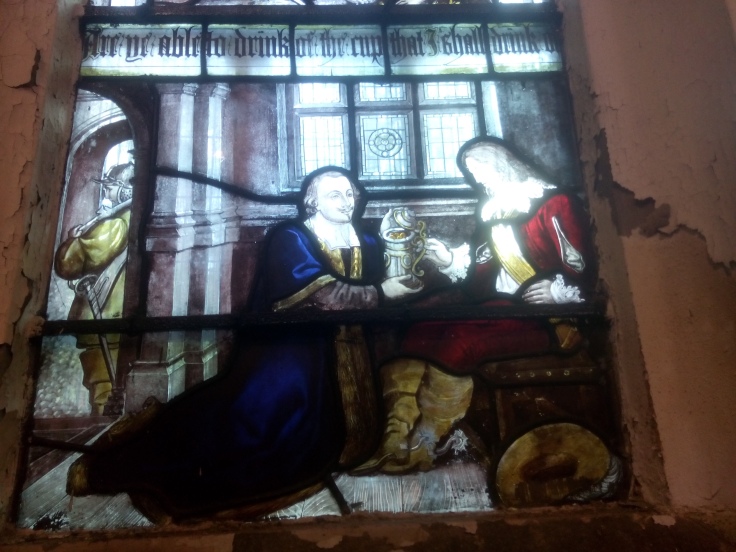 In 2008, builders working in the old Lewis’s building on the Headrow claim to have seen “a misty figure” during construction work there. Several builders were killed nearby when their scaffolding collapsed in a 19th century accident.

One of the most-haunted buildings in Leeds, the City Varieties theatre is home to three ghosts: a late-night piano player, a red-haired woman who exudes a cold aura and a man in First World War uniform.

The theatre was originally a singing room, opened in 1760, at the rear of a public house. It is the oldest surviving music hall in the country. A young Charlie Chaplin performed there in 1897.

Mail coaches used to depart from the old Rose & Crown Inn on Briggate. In 1831, the body of Robert Hudson, which had been exhumed by body-snatchers from East Ardsley Churchyard, was discovered in a crate destined for Edinburgh. His was one of several bodies which were stolen locally and sold to medical researchers. Click here to read more about Robert Hudson from one of his relatives.

The inn was also of one Leeds’s foremost cock-fighting venues. It was a popular past-time in Leeds (although there was also a strong body of opinion which opposed it) and continued locally until the early twentieth century.

Until its demolition in 1825, the Moot Hall on Briggate used to be the venue for the town’s courtrooms. On 19 January 1664, the heads of three local men, who had been executed for their part in the anti-Royalist Farnley Wood Plot, were displayed on spikes outside the building. They remained there until 1677, when they were blown down in a storm. Legend has it that, at exactly the same time as the heads came down, one of the plot’s ringleaders, Sir John Armitage, was thrown from his horse and killed.

William Hey (1736 – 1819) was an eminent surgeon and one of the founders of Leeds General Infirmary. He performed several public dissections of executed criminals, as was the custom of the time, including that of the so-called Leeds witch, Mary Bateman, in 1809. She had been executed for murdering Rebecca Perigo and defrauding Rebecca’s husband, William. It was an elaborate scam which involved slowly poisoning the couple whilst tricking them into parting with money and possessions in the vain hope of a cure. She probably would have got away with it but for William’s stubborn refusal to die.

The more superstitious among the spectators touched Bateman’s cold flesh, believing it to have healing properties (despite her being utterly discredited by her trial). Later, strips of her tanned skin were sold as charms. Her skeleton was, until recently, on display at the Thackray Medical Museum in Leeds (which also happens to be arguably the most haunted building in the city – it was a former Victorian workhouse and visitors have claimed to be grabbed by the hands of invisible spectres).

Leeds Library, founded in 1768, is the oldest subscription library in the country. It is also haunted by the ghost of a former Chief Librarian, Vincent Sternberg, which was described as being “pallid and hairless” when it was first seen in 1864. In 2017, ghost-hunter Sean Reynolds filmed a ladder moving by itself along one of the bookcases. Click here to see the film.

A ghost in a muddy green jacket and brown trousers has been seen by a shop-keeper and a cleaner in the old Bond Street Shopping Centre (now Leeds Shopping Plaza).

On the site of what is now HSBC Bank on Park Row used to stand the old Leeds Museum building (now in Millennium Square). Two of its most famous exhibits are the Leeds Tiger, a supposed man-eater from India, and the 3,000-year old mummy of Egyptian priest Nesyamun who may have been killed by a bee-sting. The Museum was bombed during the Leeds Blitz of March 1941 and Nesyamun’s nose was blown off in the blast.

Tickets are now sale for my charity Christmas event: “It’s A Wonderful Leeds!!” – a festive take on the history of Leeds, in support of OPAL. The charity helps older people live independently in their own homes. It’s on 18th December 2018 at 6.30pm. Tickets £10 + booking fee. Click here for more details and to purchase tickets. 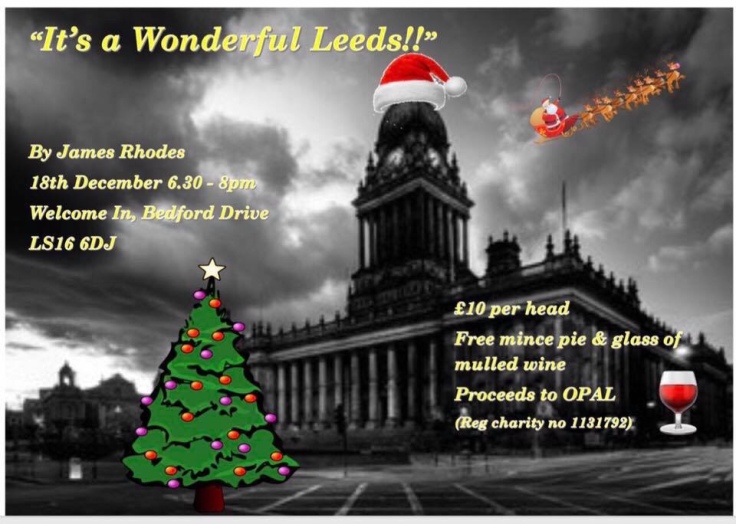