On the morning of Saturday 6 June 1891, six-year old Barbara Waterhouse went out to play and to look at the shops in Horsforth Town Street. Her family never saw her alive again. She simply vanished. The Police and local community frantically searched for her for the next few days but there was no sign of her.

In the early hours of 11 June 1891, a Police officer on patrol noticed a small bundle lying in Alexander Street, near Leeds Town Hall. He was sure that it had not been there when he last passed by. Upon closer inspection, he discovered to his horror that the bundle was the severely mutilated body of a child wrapped in a woman’s shawl.

Later that day, the body was identified as that of missing Barbara. She had sustained multiple stab wounds, her intestines protruded from her body and her head and limbs were almost severed from her torso.

The ferocity and method of the assault immediately drew comparisons with the Jack the Ripper killings that were terrorising Londoners at that time. The actual culprit, however, turned out to be a Horsforth man, Walter Turner. His mother had helped him dispose of the body (wittingly or not) but eventually gave evidence against him.

Turner was subsequently convicted of Barbara’s murder and hanged at Armley Gaol on 18 August 1891. 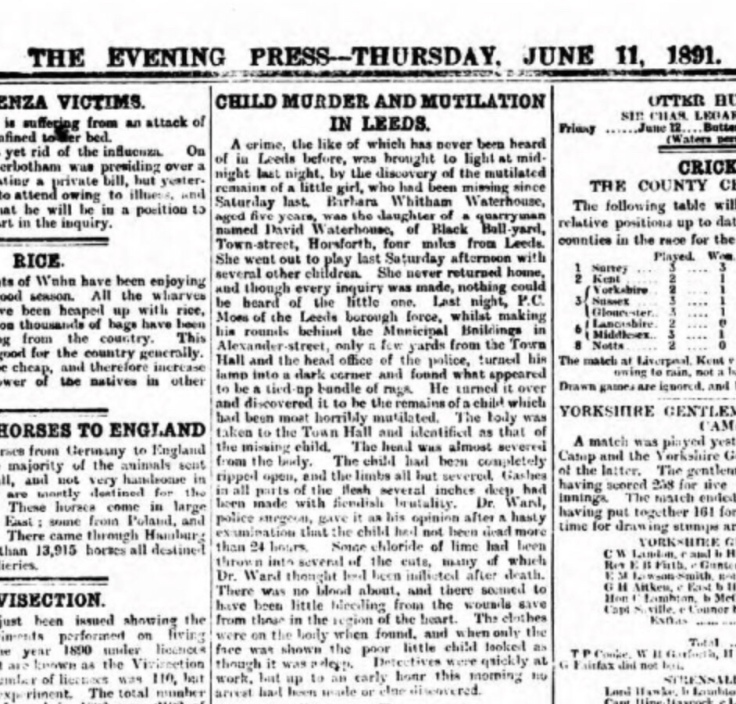 Published with the kind permission of the British Newspaper Archive.