As a crossword fan and former student of ancient languages, I am fascinated by place names and what they can tell us about local history. Once you know how to decipher the clues, you can unlock secrets of a past which predates recorded history. The study of place names is called toponymy and this is a quick toponym tour of the area around my home village of Rawdon.

Before the arrival of the Romans, indigenous Brits spoke a form of Celtic which is closely related to modern Welsh. Vestiges of this ancient language survive in the names of many rivers, mountains and hills. To Yorkshire eyes and ears, the most obvious example is Pen y Ghent, a fell in the Dales which is a linguistic cousin of Pen y Fan in the Brecon Beacons.

Closer to home, we have The Chevin which takes its name from the Celtic word cefn, meaning ridge. A quick look at a map of Wales will reveal many place names which contain cefn, or derivatives of it. The Aire comes from a Celtic word meaning strong river, which is also the origin of the Ure.

Although there is little evidence of Roman settlement in our vicinity, Latin influences can be seen in places which were associated with ancient sites of worship. The Celtic word egles, from the Latin ecclesia (meaning church), survives in Eccleshill and, until relatively recently, Eccles Grass Head at the top of Hunger Hills in Horsforth (click here for more information about the toponymy of Horsforth).

From about the 6th century AD onwards, Anglo-Saxons began to colonise the region from the east. Their language is now most commonly referred to as Old English and it had an enormous influence on the toponymy of our region.

When the Anglo-Saxons first arrived, our part of the Aire Valley was heavily wooded and they began to clear areas of woodland for farming and settlements. They called these clearances leahs and the evidence of their steady progress up the valley is evident from a map: Armley, Wortley, Farnley, Bramley, Rodley, Farsley, Calverley, Apperley, Guiseley etc.

Whilst the -ley suffix tells us that the place used to be an Anglo-Saxon clearance, the prefixes also tell us more about each one, such as:

We can also tell something of the types of trees in the ancient woodlands, from Esholt (the place in the ash trees) and Apperley (later Apperley Bridge), meaning apple tree clearance.

The Anglo-Saxons used several different words to denote different types of high ground. The suffix -don or -dun (from which we get the modern word ‘down’) is found in Yeadon (steep hill) and Rawdon (red hill, although not everyone agrees on this). The Billing (in Rawdon) derives from an Old English word meaning a round hill. The word hill itself comes from the Old English ‘hyll’ as in Hunger (from hangra, meaning barren) Hills.

Some places were named after prominent, but long-forgotten, local people of the time, such as Gislic’s leah (Guiseley), Pudoc’s island (Pudsey) and Cwics’s hyrcg, meaning strip of land (Cookridge).

The coming of the Vikings from the ninth century added further linguistic colour (although the impact was felt more to the east of our region). The region we now think of as Yorkshire was divided into three thridings (ridings) and subdivided into wapentakes. The settlements on the north side of the Aire were assigned to the wapentake of Skyrack and those on the south side to the wapentake of Morley.

Wapentake literally means ‘take your weapons’ in Old Norse and was therefore originally used as a way of raising local militia. The wapentake of Skyrack met beneath a scir ac (Old English for shire oak) in the leah of Hedda’s people (Headingley). Those familiar with the public houses of Headingley will know exactly where this was!

The Vikings also gave us Tyndr’s Hyll (Tinshill). Again, however, nothing is known of the toponymous Tyndr.

This brief introduction has only scratched at the surface but the next time you are out driving think of each road sign as a signpost to the past and know that there are stories there to be unlocked. 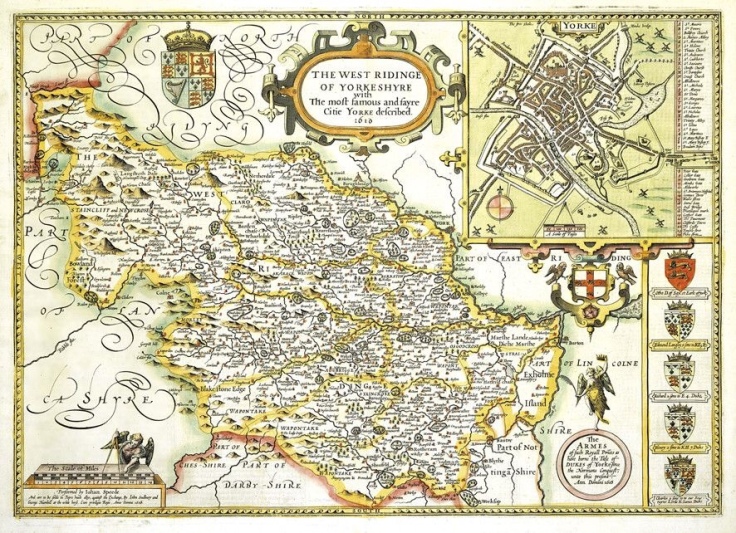 2 thoughts on “What place names tell us about the past”